this was my 6th year at Further Confusion and once again, I had a fantastic time!

my bunny hat is off to the organizers and staff. the con just keeps getting better (and bigger)! it's really amazing to realize this event is 100% volunteer run. I'm always especially proud to tell friends about the big donations to animal related charities the con generates every year. this year, we supported a mountain lion habitat restoration group, as well as Guide Dogs for the Blind. good job, FC!

this was also our 4th year here as bunnywarez and it is always such a sweet anniversary for us. FC 2006 was our very first sale. Jovino had found out that it was only $45 for a table in the Furry Marketplace, and thought we might try selling ears and tails to help pay for our hotel room. that sounded like fun, so we went for it. with only six weeks before the con, we created the name, logo, original patterns (which we drafted from scratch) for everything, the original Ninja Kitty... we even set up a web store and got cards printed. we don't go halfway! we did well enough to cover our con expenses, so we decided to keep going with it... and that is how we got our start.

this year we arrived on Thursday, loaded in to the Dealers' Den, and immediately had to run back to Oakland for a forgotten box of hats. oops! I drove, because I'm quite the leadpaw so it didn't take too long. back at the 'tree I jumped into my favoritest pink bunny jammies and hit the party floor.

the babyfur cub pub was open - and so was my mouth when I first saw it! scritchwuff did an AMAZING job on the decorations. he created an incredibly colorful and welcoming environment - a giant blanket fort! he built a framework of metal conduit and PVC pipe, suspending care bear quilts and blankies so that the walls were completely covered. it also held up strings of pretty xmas lights. it was awesome! he really raised the bar for room decoration. 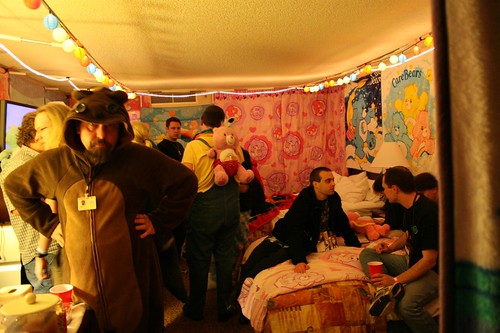 this is our pal Sabot rocking the first set of bunnywarez bear jammies evar, in the Care Bear room (aka Cub Pub).

next door, our evil genius friends were bartending at a tiki themed party. it was almost 1 (sadly, last call for the party floor this year) so we knocked back Kevin's diabolically delicious blended concoctions while we had the chance.

the next day, we woke up bright and early and headed down to work. some burner friends of ours were vending out in the hallway and it was fun seeing their reactions to being at FC for the first time.

I had the first set at the "Retro Night" dance at 11pm (THANK YOU Neonbunny for booking me!) so we grabbed some sushi and a quick nap, then headed over to the ballroom. Jovino took a little movie, and there is also another clip up on youtube, of the Cats cats doing the macarena to "No Parking on the Dancefloor" which I absolutely love. yay FC! this was my second time spinning for the big dance, and I think I really nailed it this year.

oh and can I just mention here that as the clip was ending (and Last Dance was going into the downtempo break towards the end) a big cheer went up - and then, I got to see the classic, awesome furry conga line *from behind the decks*. (last year, they did it for Jovino but there weren't as many peeps there for my set that time.) I think the "retro night" idea really worked, as people showed up wanting to hear the music that was planned. the only really painful music was Sunday night, and I know that is a matter of taste, I'm sure some people really like happy hardcore - it's just not for me.

afterwards we went back to the room to change and drop off stuff, and by the time we got back out, the party floor was completely shut down at 12:45. poo! we decided to see what was going on down in the lobby and hung out with friends there for a while before calling it a night.

Saturday dawned before we knew it, and it was back to the den. Jovino had a climbing date so I was on my own for several hours in the booth. fortunately our nice neighbors didn't mind keeping an eye on our table so I could grab the occasional quick break, and our friend Tugsie kept me company for quite a while too. this was the day of the fursuiter parade - and OMG 530 of 'em!!! super cool!

our housemate David came down to check out the con. the three of us watched the masquerade up in the room before venturing out for the photoshoot (Tugrik got some cute shots of us) and we also snagged some yummy desserts. 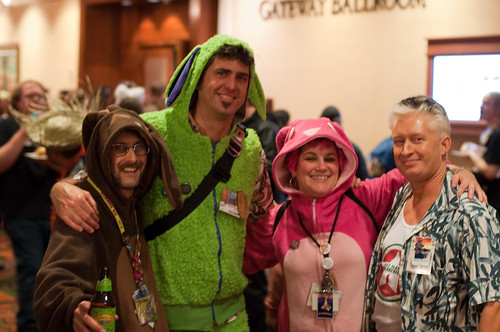 this is us with our friend Kevin.

we danced to Lord Kook's awesome set, then took off to check out the party floor.

this brings us to pretty much the *only* fail of the entire con. the klingon party has been a highlight of the con for the past several years - we've always enjoyed hanging out and quaffing some ice cold REVENGE with our ridgy-headed friends.

this year, I already had a cocktail in my tiki mug when we rolled up - I was nursing a delicious St George's absinthe and in no hurry to finish it off. some dude bumped into me, knocking my drink to the ground and covering the front of my cute pink bunny jammies with sticky absinthe. o noes!!!

I ducked into the sink area outside the bathroom, and a surly klingon rushed up and basically shoved me out the door, while I tried to explain that I just wanted to rinse my hands off. (I know, lol "surly klingon" but really they've always been nothing but nice to me before.)

so I went down the hall to the consuite, figuring that since they have a microwave etc there to prepare food, that surely I'd be able to wash my hands there. no such luck! I was brusquely told "we don't have a public bathroom" and my (polite) request to simply rinse off my hands *with the bathroom door open, while she watched* was also brushed off. dejectedly heading back up to the room, I passed by the babyfur room, where not only did they actually let me wash my hands, but they were even NICE about it, hugging me and saying they felt sorry that I was hassled. THANK YOU BABYFURS! a friend in need is a friend indeed.

so, the fail was that you can't wash your hands in the consuite, where you are invited to prepare food. the nearest public bathrooms were on an entirely different floor of the hotel - so you had to touch the elevator buttons in between. :-/ however, next year we're in a different hotel (and I also mentioned this to a senior staffer) so I would be quite surprised if it was like that next time.

after that, Jovino kindly let me borrow his white bunny jammies (all I had clean was my ocelot, and much as I love it I wanted to keep being a BUNNY) and out we went again. Sabot (so cute in his bear suit!) poured me a Mai Tai and the night was back on track. we had such a good time on Saturday, the parties went a bit later and it was just a great night.

Sunday morning was our panel: Venturing Out of the Den - tools and strategies for talking about the furry subculture with other people. Candace came down to take part again this year, Jovino was also on the panel, and we were honored to have David "Flint Otterhall" Cooksey from the AAE board bringing his perspective from many years in the fandom. the panel was great! we had a lot of participation from the audience and it was a terrific discussion. Genevieve Fox came by our table later and said she hoped we'd do it again! of course, I would love to. I am all about getting rid of "furry shame" and replacing it with positivity.

Sunday was also the last day of vending - thankfully! soo tyord. Sunday evening, our friends Rebecca and Todd came, in costume as a reindeer and an animal sanitation worker (in a vest made of a tidy cat bag) respectively! we all went out for pho and then watched FNL in the room. ROFL @ Popu-Fur! excellent writing, acting and singing = 100% WIN. the bar is raised high on that one, for sure.

Jovino had been invited to spin a rubberfur party up in the penthouse, so he got into his super hott latex bunny suit and off we went. 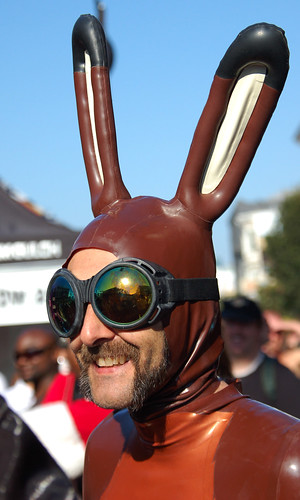 latex bunneh by Strange Animals (aka our friend Mike). this pic is from Folsom Street Fair - just so you can see the suit.

we saw some truly amazing fantastical creatures there! I also had some great conversations with a few folks I'd previously only seen in suit. a fabulous party! it was super fun showing our friends around the con. everyone had a great time and wanted to come back next time. how's that for showing the fandom in a good light?!

when the party wrapped up it was after 2, and by the time Jovino got changed and showered it was past 3. nevertheless, I wanted to take one last stroll through the lobby. Jovino mustered his strength and once again we wriggled into our jammies. I'm glad we did! we saw a few friends, talked with a customer we'd met earlier who was at his first con, and got hugs from the Last Fursuiter Standing (at least on Sunday night!)

the next morning (after not nearly enough sleep) we packed it all up, collected our last few bins from the Dealers' Den, stuffed everything into the bunnyvan and rolled on home. every year we say "maybe we'll come back for the dead dog dance" but it's tough, what with a 45 minute drive, two adorable kittenehs and a kegerator full of icy cold sierra nevada in between. maybe next year!
Collapse