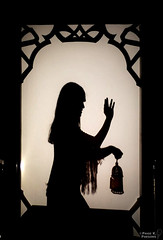 Silhouetted Feist
Originally uploaded by gussifer
I feel it all...

last night's show at the Greek was absolutely perfect. Feist and the band were clearly enjoying themselves. they played all of her favorites, but it wasn't like just hearing the CDs played really loudly (with great sound... which I could do in my living room!) - they were all unique live versions. it was awesome! the shadow visuals were amazing too!

overall it was an incredibly beautifully done show... without ever becoming pretentious or over produced.

I am a huge Feist fan so I knew I would love it... but Jovino, not being very familiar with Feist (but coming with me because I was excited about it) also loved the performance (and got increasingly into it as the show went on.) the overall audience was great too, lots of people knew the words (and of course being the Greek the sound quality was terrific.)

here are some of the songs (not in order, sorry!):

...actually, first the stage went dark and then she came out and crept across the stage holding up a lantern with a single candle in it, at one point pausing and posing to evoke the Hermit tarot card. she then walked behind a white scrim/shadow screen, and began to sing: an acapella song about how women's hearts are first controlled by their parents and then later ruled by their husbands (which she read off of paper notes - making a point to shake them.)

then into:
When I was a Young Girl
Gatekeeper
My Moon My Man
Mushaboom
*from this point on I'm not sure of the order... but I know she did these songs:

I Feel it All
Limit to your Love
Honey Honey
The Water
1234 (before the song she said something about the ipod shuffle and then "this is going to haunt me for the rest of my life"... and then later in the song she said "I have to take back what I said about the ipod because it just seems mean-spirited")
Past in Present
Brandy Alexander
How my Heart Behaves
Intuition
Inside & Out (OMG as soon as I saw the mirrorball I was SO hoping she'd do it! but she d'in't and d'in't and then JUST when I was giving up hope... YAY!)
Lonely Lonely
The Park
Let It Die
and one or two more I didn't recognize. I *think* that is all of them but I could be wrong.

her presentation and energy for the whole show were off-the-charts stellar, with just the right amount of talking with the audience, and great musicianship from the whole band.

I freakin' ADORE Feist. I really see her as the next generation from Joni Mitchell (poetry, singing, musicianship... and they're both Canadian!) and I do love her so. she also enthusiastically brought her opening band (The Golden Dogs from Toronto) out on stage with her for a song.

overall, it was an AWESOME night, and well worth the premium price charged for seats at the Greek.