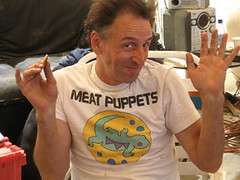 Thank you for all your yumminess, brother Jeff
Originally uploaded by duchompski

so, in LA, earlier this week... I'd been really worried about my friend Jeff, knowing he was dying (from a goddamn nosocomial superinfection which was the fault of the hospital... also knowing that the longer it went on, the more the infection would take from him.)

anyway. far away in LA, staying with friends. I awoke several times in the night and each time I had to resort to counting to get past my worries and find my way to sleep.

towards the morning time (early tuesday am) I had an amazing dream about seeing Jeff. I encountered him somewhere out in the noosphere. we were both completely ourselves, but manifested as pure energy. I recognized him immediately and reached out to hug him and we sort of flowed through one anothers energy selves, rather like a ghosts in a hollywood movie. I'd actually sort of understood it would be that way.

despite us both being noncorporeal the hug did feel just like a real hug and we smiled at one another. he wanted to reassure me that he was ok, that it was all going to be ok, and that he was moving on to a different way of being, of existance as an energy being. I understood that furthermore, that sort of existance was much less individually differentiated than our usual physical life, yet that the uniqueness that is Jeff would continue to exist - merged with all the other energy, yet still *him*.

I expressed my love for him and my gratitude at receiving this message from him. he acknowledged this and expressed his love and well wishes to me and to all those who care for him. he also wanted to remind me/us that he had *really lived* in his time here and to tell us not to worry about him because he will be ok.

around that point I awoke, and realized what I had just experienced. I wanted to try to get back to sleep (because I needed more sleep, and also I hoped to extend my visit in the dreamtime, although at some level I knew that it was not going to happen, and that what I had was what I was going to have.) I did slip back to sleep, but the connection was closed - almost as if my awakening was part of an "end of transmission" signal.

I have had other similar dreams of energetic interactions with people I care deeply about, and in a way they are all very much alike. for one thing, they always feel very different than regular dreams. also, a common feature is that I've awoken at the end of the encounter and then slept more. I don't want to get into a lot of heavy analysis about this, and I certainly do not want to argue about the meaning (or veracity) of my experiences. I would rather experience it for what it was: a gift.

the reason I am posting this here, now, is that tonight was the wake/memorial for Jeff Holmes.

even just typing that out is still incredibly surreal for me, but that is indeed what it was. I had not intended to stand up and speak at all, but was moved to tell this story (though in less detail.) I have had numerous amazing and wonderful interactions with Jeff, and this last one is the most amazing (and perhaps the most wonderful as well.) I am, as always, grateful to Jeff for taking the time to truly connect with me - that was actually one of the defining characteristics of any encounter with Jeff - he was always truly present, really there with you.

I can hardly believe that he is gone from us.

but, I can also take one piece of his wisdom to heart - to always really LIVE! Jeff was a comet, streaking across the sky. we can all be our own comets, we must just do it!


also today, I spent the afternoon getting tattooed. for quite some time I'd been planning on getting a tattoo in honor of my (deep, amazing) friendship with my dear friend Allison. she had a text tattoo which read "like fuck" (it's what you say when you can't say "i love you") and I'd decided this would be the perfect tribute tattoo - especially given the multiplicity of meanings in the phrase (as in, this hurts LIKE FUCK!)

for weeks and months I'd waffled over the font, placement, etc... finally I decided I would set a deadline, to force myself to choose. I'd suggested an appt on Thursday, the day after we planned to return from LA, and the tattooist suggested Fryday instead, so I agreed.

this was all before the stuff with Jeff had started happening.

Thursday night I was up until 1am, looking at fonts and getting Jovino to make me the perfect printout of my final choice. he was a huge help - both with the tattoo and with the memorial.

so, Fryday (today) rolled around, and off I went to get tattooed, hoping I would not be late to the memorial. (my tattooist is an OCD perfectionist - but that is a good thing in a tattooist!)

so, as anticipated, the session went long (NOT that I am complaining! in fact, I love Dillon at Telegraph Tattoo in Berkeley. clean shop, nice peeps, and he is SO conscientious and professional. tell him M (or the bunnies) sent you!)

so anyway, after being tattooed, eating, changing and packing the van we were something like 90 mins late, but apparently so was everyone else (fridays are tough.) we pulled up, got some friends to carry up our big silver cooler full of beer (the contribution I'd arranged with the folks coordinating) and joined the wake. it turned out to be perfect timing! we were there for only a few minutes when they started the stories. I'm SO glad I could be there!

we had actually planned to go to LA this weekend for the Grilled Cheese Invitational Nationals on Saturday (since I won in the Oakland regional a couple months ago) but I'd accidentally double scheduled with a bellydance workshop on Sunday - and I had to choose that, as I am committed to getting back into the bellydance groove. as it turns out, I am actually REALLY glad about this, because I would not have missed Jeff's memorial for all the world. I never dated him, but I sure did love that man.

I had a lovely interaction with Robin as she was leaving - that woman is a class act and I so admire her. it meant so much to me - more than I can say - that I could be there tonight, to hear Robin, Jeff's brothers (one of whom looks almost excatly like him - so glad I knew this going in!) and many of his (my) friends speak, and to be a part of it myself.

so, tonight... so many people admired my tattoo - as I told them all, I'd long ago planned this tattoo as a tribute to Allison, but as the appointment happened to be on the same day as Jeff's memorial, it was of course inextricably bound up in my friendship with him as well - which would have certainly suited Allison's generous nature. I love them both, and always will. it's kinda funny how these things work out.

so, anyway... I will always miss my friends, Allison and Jeff. both, in their own unique ways, were such shining stars. I will always love and be inspired by both of them. I also want to thank them both (individually, duh) for the time and effort they took to connect with me, and befriend me. it meant so much. (I can't say "more than you know" because that might not be true.) but... just know how much you both mean to me, and know that I will always carry your memories with me... like fuck!