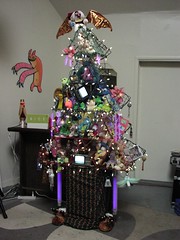 I have been meaning to post this. Jovino designed the basic structure of this tree last year, and this year took it to the next level (+1!) with some great tweakes. we stuffed it with plushies and have been adding every xmas card that turns up in our mailbox for extra festiveness. I also added the photos of Allison I brought home from her memorial (which I am in the process of writing about in a separate post.) I'm so glad we put it up when we did as I have so little energy lately... but it is nice to have set up and it always lifts my spirits at least a little bit.

it's been quite the fucking week.

...and so it goes. seems like all I can do is move forward and get myself through it.

sunday was the big community memorial for Allison.

well, I say "for" but we all know who these things are really *for*. nevertheless (or maybe moreso) it is still important to do them. it wasn't how I'd have chosen to do it, not exactly, but it really was lovely and touching and encouraging and I was so, so glad and grateful that I was able to be there.

the night before I'd been working on making stuff for the sale that bunnywarez was taking part in, and of course thinking about Allison.

it occurred to me that I should see if it was still possible to sign up to speak. Allison was really important to me - one of my closest friends - and I had finally come to the realization of what I could say, and also I wanted to represent, stand up and honor her.

so I sent off an email saying that if there was still time I would like to speak briefly.

the next morning the response was waiting for me - yes, please do, I'll talk to you when you get there. so I got ready to go, handled last minute details for the sale and headed over. many, MANY thanks to Tina and Lane - our friends who helped

jovino so I could go.

as soon as I arrived I knew I'd done the right thing in arranging to be there. it was super good to see friends and I exchanged many hugs.

after being there for half an hour or so, I was by myself in the bathroom and the strangest thing happened.

suddenly, and without any sort of warning, I crossed the "bridge" over to angry.

All of this was (and still is) most definitely NOT OK, and from somewhere I suddenly found the energy to really feel and experience that. (before I'd just felt sad and lost - which I still feel in spades - but this was a new development for me.)

so, this is all well and good (and probably perfectly normal and reasonable) except for the inconvenient fact that I was supposed to speak to the assembled multitudes, and very soon.

I thought perhaps I should simply back out, but several friends I talked to about it said that I should speak anyway, that my feelings were legit and that I was probably not the only one having them.

ultimately, I really just felt it was important for me to stand up there and honor Allison. I simply couldn't bear the idea that they'd call my name and I wouldn't be there to speak up. that just would NOT fly.

i went back to the bathroom and fixed my lipstick and thought about what I had to say. I knew I wanted to be brief, and I think I managed to do a pretty good job.

my main point was how important it is to make time NOW for the people you love. don't "get together next week" - get together THIS week.

next week may never come, and even if it does it is all too easy to put things off again and again. if it's important to you, if your friends are important to you, see them NOW. she was only 26, god damn it. we SHOULD have had all the time in the world. should have...

I also mentioned my (very) recent transition into being angry and that it was NOT ok with me that she was gone. I saw people nodding so I think I did ok with this part too.

afterwards was a bit of a daze. Davor was there, and kindly helped me up to and down from the stage, and I sat with Artemis while the folks after me spoke. being with others who understood (even though I know we all ultimately have a different experience of life) was a great comfort and really meant the world to me. (Davor also showed up at the sale and very kindly helped us load out, and then gave me Allison's "butterpear" flag from Nifer's pirate birthday party a couple of years ago. i was incredibly touched.)

when all the speakers were done, i wandered through the ranch talking to folks and looking at the altars and slideshows. it was intense, beautiful, sad... I was struck yet again by how beautiful Allison was (certainly not news to me, but ever amazing... especially her gorgeous eyes) but also by how sad she looked, even in the smiling photos.

it's there in her eyes in damn near every photo, and it breaks my fucking heart to see it now.

i knew she had gone through many rough times and I knew she'd been depressed. it came through intensely in so many of these photos, even the smiling ones. one of her former boyfriends said something that has helped me immeasurably - he reminded us all that she loved her friends deeply, and that we were the bright spots in her life, and the reasons she was able to go on as long as she did.

he was terribly torn up and I really felt for him. hopefully he will see that his observation applies to him as well, as I know he meant a lot to her.

also at the memorial, I met Allison's Mom. (yes, her Real Mom.) she was of course totally bereft, yet incredibly gracious. I told her how much I loved Allison (something that she had clearly been hearing from many of us) and also decided to go out on a limb and attempt to explain to her the running joke we'd had that I was Allison's "mom" (because she'd call up to ask to borrow the car to visit Gabriel or to do laundry - of course I always said yes, so it became "mom, can I borrow the car" and we had a lot of laughs about that. I also want to say that she was an excellent "daughter" who always returned the car with a full gas tank and cleaned too - sometimes very thoroughly.)

Allison's Real Mom seemed to get it (or was extremely gracious if she did not) and I went on to emphasize that the irony of the situation was that she always gave me the best advice - she was at least as much my mom as I was hers. I also managed to talk about this a bit during my turn at the mic.

overall I was incredibly glad I'd been able to do this, and I totally owe some favors to the two friends who helped out at the sale. And, even more so to Jovino, who is not really one for memorials but who has been incredibly supportive and kind to me through all of this. he usually finds it uncomfortable for me to thank or praise him too much (and I am sure that this will make him squirm) but I must express how much his love and support mean to me. I love him so much, and both in the good times as well as the times like this, I can really tell that it's mutual.


before I left the ranch, I picked up a couple of photos of Allison (one with me at Santacon two years ago, with her all in green makeup and looking so adorable - she'd hung out at my place the previous night with me and the ex-bf, all of us working on our Santa looks - I dyed my hair and sent crazy santa music streaming over theory radio while she perfected her green elf makeup and the three of us hung out and talked and talked and laughed and laughed) and another of her that really shows her amazing eyes but has such a veil of sadness to it that I just can't bear to look at it for very long.

these photos and the butterpear flag are now gracing our kwissmass twee. it makes me sad and happy all at once whenever I see them.

I also took a makeup brush and some makeup. It means a LOT to me to have these little things, and I hope it was ok that I took them. they smell so strongly of her perfume that it is a bit of a shock to go into my room now - it so smells like she was just there, with a whiff of perfume hanging in the air. I want to find out what the perfume was, I would love to have some to make some scented candles, and just to use as a kind of incense every now and then when i want to feel close to my sweet homegirl. i think it's estee lauder something (she worked at estee lauder, at macys in union square). if anyone reading this knows what it was, please tell me.

i don't know if the photos I have been describing are online, but here is my favorite ever photo of Allison and me:

we are at Hooters (yes, Hooters) dressed like bunnies.

we're pranking the "Xmass in July" Santas. this was two or three years ago. the bunny prank was totally inspired by her, and I was so glad she was there. (I'm wearing Jovino's bunny suit, which he lent to me since he was out of town for the weekend... we'd just started dating and I was beyond thrilled to be wearing it, and to be with my beloved Allison.)

I think I have expressed all I can about the memorial and the events of the past few days. it's still unimaginably hard, but I am going forward as best I can, and with the love and support I have been receiving I am actually starting to believe that it really will be ok.

nevertheless, I can use all the hugs I can get... i just miss her so much. so if you see me around, please let's have at it.
Collapse