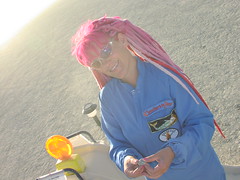 m has a piece of hope
Originally uploaded by jovino.
This is me at the Rock/Slide installation.

(So... I wrote this about a week ago, but never finished it enough to post, so I'm posting it now. Because it is WAY too good to just let it go unrecorded!)


I am SO HAPPY in my life right now.


(Last) Monday night Jovino and I had the most amazing interaction. We'd been sewing, then went to chill out a bit before going to bed, as we usually do. What happened instead was that his mood went from silly (we'd both been laughing so hard at this and that) to deeply serious.

He'd been reading his lj friends page and one of the postings brought up some intense memories for him. He intently typed away on a response, but took a break to let me know what was going on with him. It was an amazing download. He related his memories, his feelings about them, and then went on to talk about us and our relationship. He told me that he saw that we were so in sync (except when we're not - heh - but he is right, it's not a 100% sync and it can really be tough when we are trying to get back on track, especially since we kinda get spoiled, being used to being so in sync so much of the time.) He said he knew I was The One because of this. I was SO HAPPY! I thought my head might split in two from smiling.

To be honest, I have known for a long time that he is The One for me. It's blindingly obvious to me! (Although I'd never said anything about it, because I felt that just knowing it was enough for me, and I didn't want to make him feel pressured or anything like that.) Keep in mind that I say this as a girl who has deeply questioned the whole concept of "The One" (and for a long time, too) - but when it is right here looking me in the eye... well, what can I do? I have to admit it. That's just it - What It Is. I feel SO LUCKY to be with this man, to have the relationship we do.

When we were out at burning man, we came across a piece called "Rock/Slide" which consisted of a small plastic slide (between 2' and 3' tall) and a bunch of rocks which all had the word "HOPE" written on one side. You were supposed to choose a rock, think about your biggest fear, and project the fear into the rock. Then you rolled it down the slide, and if it came up with the word HOPE facing up, your fear would be transformed into hope.

I was moved to try it. By far, my biggest fear is that I will do something stupid and fuck up this wonderful relationship we have. He is the best, most suitable, caring, supportive and loving partner I have had in my entire life (no exaggeration!) and my greatest fear truly is losing or damaging what we have, through some asinine, unnecessary stupidity on my part.

So I got this in my head, focused, and rolled the rock down the slide. The rock came up with HOPE facing up!!!!! This sparked the realization that I could perceive my fear as a hope - rephrase it from "I fear I will screw up and lose this precious, wonderful relationship" to "I HOPE I can live up to this precious, wonderful relationship, and be as good to him as he is to me!" A much more positive way of looking at things. I am very grateful to the creators of the Rock/Slide for this transformation in my thinking. Looking towards the positive is always best (and most productive! How can you work towards a negative?!)


Back to the present, sitting on the couch in Oakland:

He also told me that he was fully convinced that he was - right then and there - at the absolute midpoint of his life; that he only had 40 more years (plus change) left. This actually made me cry. I truly cannot bear the thought of living without him. It is like my attatchent to every other relationship I have had, added together and then doubled! It's the one downside to loving so much. And it's tough for me to keep reminding myself that Hope works better than Fear.

He was totally sanguine about it, kept going on about how it had to happen sometime and now he knew when it would be, basically had all these pithy responses to my sadness - well, until I finally said "ok, so you are convinced that you are going to die on the 2nd of October when you're 80. In that case, I just hope that I go first, because I don't want to live without you."

Then he got it. He looked all worried and said "no, I'm not into that!"

So, we decided that since we do have to die at some point, having it be at the same time would be ideal, so neither would have to live without the other.

I said, "right, so maybe we'll be giggling, watching some fucked up clip on whatever the future version of YouTube turns out to be, and our heads both ASSPLODE! BAM!!! You know, like those aliens who can't stand yodelling in Mars Attacks!" Really - how rad would that be? (Well, I guess it'd be unfortunate for whoever had to clean it up, since our heads would not be enclosed in glass spheres... butanyway.)

When we finally got into bed I explained that I have always loved Saturday more than Sunday, because Saturday still had most of the weekend ahead of it, while Sunday was the down side, edging ever closer to Monday. So I was just not feeling ready to face that Satuday could be over, not yet. *I* have not had 40 years with him! We have only been together for just over two years. I want MORE!

He reminded me that it wasn't really Sunday yet - more like Saturday night at midnight, with the party totally going off, the DJ throwing down the best music, and everyone dancing and having fun, and that even when it did turn over to Sunday there would still be a lot of good times and chilling to experience. That made me feel better. And then came the part where I hope we didn't wake up our housemate, or scare the neighbors.

Around 5 we were totally worn out. We slept like rocks until the #(*%^Y#*($^ alarm went off at 9:30 just like it always does. Just writing about this makes me wish for a nap! I can hardly wait until we are both doing bunnywarez (and ONLY bunnywarez!) all the time! It's going to happen. We are going to MAKE it happen!

I love this man with ALL my heart. I love our life together. And it is only getting better. Our business is taking off - which means that we will have more time together, focusing on it. We work together so well!

I feel SO fucking GRATEFUL!


And, in the spirit of National Coming-Out Day, I'm posting this here straight-up, no filters. This is me coming out as a one-man woman, something I NEVER thought I would be once I tried the poly life.

That's right - I no longer have the tiniest smidge of desire to date or be in a romantic relationship with anyone but Jovino. I am SO IN LOVE! I really can't see finding anything better than this (or even anywhere near as good) and I have no inclination to waste my time dating when I could be with my wonderful, amazing man. Especially since, as he says, our time on earth is running out! (And even though he has repeatedly assured me that it would be ok if I did want to see other people.)

If you are reading this, I hope you find (or have found) love as fulfilling and wonderful as what I am experiencing.
Collapse