so, we are back from furcon, but still so much to do. a successful proof of concept means we need to work even harder to get this baby bird to fly!

and, with the serger in the shop, we are pretty much forced to work on our web site - which is a good thing, overall. it needs doing, and sooner is better. I've been helping write copy and also corresponding with "special order" peeps from FC. it's cool - although I am chomping at the bit to design more, and get back to making things!

also, the kitty issues continue. 4 is not yet on an even keel. sometimes she is hungry ALL THE TIME, for days... then sometimes she will not eat for a day, or even longer. it comes down to her thyroid problems. I even made kitty risotto (rice cooked in chicken broth with butter) and she refused it. I know part of it is she just does not feel good - but I don't like seeing her go more than a day without eating. yesterday I gave her the pink stuff, to settle her upset tummy (I did it so Jovino wouldn't have to do it - I'm willing to be the bad guy and take on the onerous task of oppressing the kitty so she can be mad at me instead - it's actually easier for all three of us, this way. and, she does still sit on my lap sometimes.) she stopped barfing but didn't eat. still, even that is an improvement from the barfing.

today I tried the tactic of offering both a smidge of her food (the better to tell if she actually has any) as well as a little rice. eventually I removed both, hoping to make her actively *want* food. offered it a while later, but no dice. just a bit ago I went outside and picked her a few blades of kitty grass (I think its actually wheatgrass). she LOVES the stuff, and went right for it. after that she ate a tiny helping of her regular Nutro kitty food, but didn't want seconds. I left a little bit out (as well as some kitty risotto, just in case she flips over to the hungry cycle during the night) so we'll see how she does. at least she ate a little. I bet that if I really keep at it I can get her eating again. it just takes finding the right combination.

yesterday, we went to the junkyard to get supplies for more seatbelt belts. it was fun (and I found some great colored webbing, which cleaned up really well!) so now we can offer midnight blue, gunmetal grey, chocolate brown and even some red webbing (while they last) along with our standard black. it actually costs us quite a bit more to source the webbing and buckles from the junkyard (compared to making fake recycled seatbelt belts) but I think they are so much cooler - and I'd much rather use recycled materials instead of new if at all possible. it's not even like we're keeping all that much stuff out of the landfill - but, it does still make a difference - and, doing this instead of contributing to the manufacture of new parts also makes a difference on the other end. it all ads up! besides, they are just plain cooler.

k, I'm really tired now. got to get to bed. one of our furcon friends sent a supercute image of our table at FC and I totally want to include it, but I'm too tired for the logistics this would require. bah.

off to curl up in with my baby, in the warm and cozy bed! =) 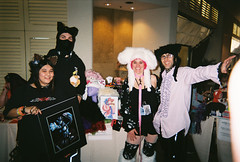 bunnywarez at furcon 2006
Originally uploaded by djmermaid.
This is a photo of Keres and Sesu hanging out with us at the bunnywarez booth at furcon, and showing off the artworks they won in the auction. This was taken on Sunday afternoon by Pup. As you can see, we're having a great time!

Thanks to Keres for permission to use the photo. (And thanks to Sesu for making such a rad ninja kitty!)

BTW, if you want to see a bigger version of the photo, you can click through to Flickr by clicking the image.

We are seriously considering going to some other cons - to vend in some cases, and just to have fun in others. I love seeing all the costumes - it's really inspirational! And I enjoy the opportunity to take a mini vacation and meet new people, most of whom are friendly and open. (Not to mention the opportunity to run around in costume all weekend long - ok, so I live in the bay area, and I can do that any time I want. It's still fun to have it in a more concentrated setting.)
Collapse